‘Esperanto Por UN’ is an international group of Esperantists who are trying to strengthen ties between the UN and the Esperanto movement. Our organisation is led by a president and a board and works in conjunction with the Universal Esperanto Association; teams of co-workers are in New York City, Geneva, Vienna and Paris. Read about our members, goals and positions below, and about the work of the UN.

Board members of ‘Esperanto Por UN’

Humphrey Tonkin, chief representative of UEA at UN. Humphrey is a former president of the University of Hartford, USA, and former president of  UEA.
Ulrich Becker, official representative of the UEA at the UN. Ulrich is a graphic designer and publisher.
Sofiya Soskina, official representative of the UEA at the UN. Sofiya is a retired specialist in computer science and works for Unicef, the UN foundation for children.
Steve Eichblatt
Charles Mays
Jonathan Reeve
Anna Bennett
Rafael Lima,editor of the blog un-esperante.
Donato Valdivia
Francis Hult
Jon Liechty, musician

Our team in Vienna

Hans-Michael Maitzen, retired professor of astronomy at the University of Vienna.

Our team in Paris

Our team in Geneva

Cesco Reale, chief representative of the UEA at the UN in Geneva.

The TEJO team for the UN and Unesco Universal Esperanto Association (UEA) and the World Esperanto Youth Organization (TEJO) hosted a side event at the 10th Economic and Social Council Youth Forum. The event, “Linguistic Rights and Young People: Challenges and Opportunities”, happened on the 6th of April 2021.

Rakoen Maertens (Belgium/Britiain) talks about representing UEA and TEJO at the United Nations and Unesco. His presentation links to the Festival theme: UN at 75: dialogue and international understanding in a changing world.

The UN at 75: Representing UEA and TEJO at the United Nations ans Unesco.

TEJO took part in the youth forum of the United Nations, ECOSOC, in April 2019.  Read the programme, with mention of TEJO and the keynote address by Rakoen Maertens. 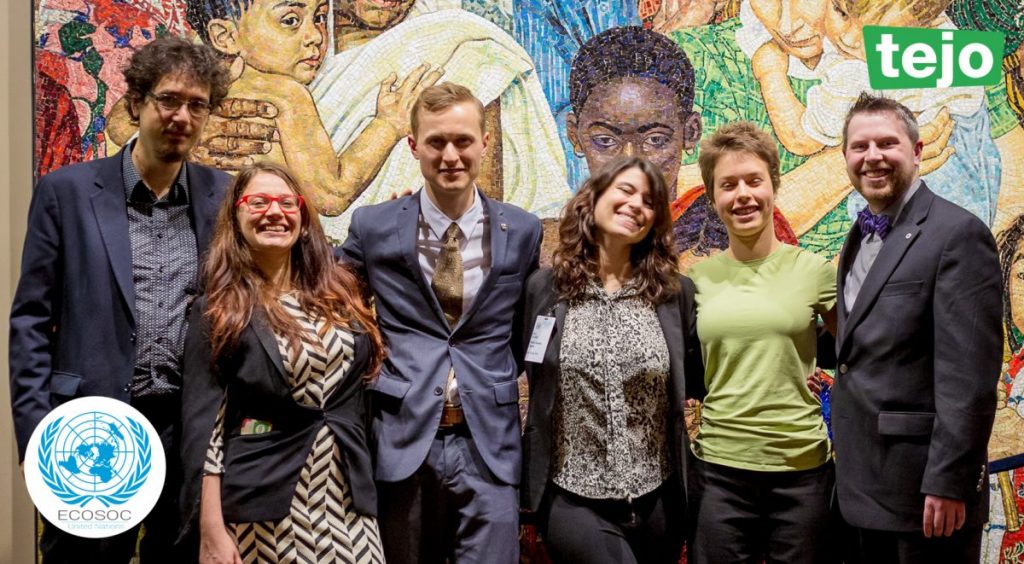 A delegation of seven Esperanto speakers represented TEJO during the youth forum of the United Nations,  ECOSEC, in New York.

The delegation was very well received; TEJO’s presence was a great success.

Rakoen Maertens was the keynote speaker during the closing ceremony; António Guterres, the Secretary-General of the United Nations, was amongst those watching Rakoen’s presentation.

Our aims and how we achieve them

Read how our representatives accomplish these aims

We often have the opportunity to present the positions of the Universal Esperanto Association (UEA – learn more here) to UN officials and non-government organizations on various aspects of the UN’s work. To that end, we publish occasional position papers.

Global Citizenship Education plays a key role in addressing current challenges. It encourages us to act responsibly in our lives and communities. It helps us understand that our challenges are connected, and so are the solutions.

Education for Global Citizenship: The Importance of Langauge Learning  March 2017

Mother-Tongue Education: We Must Teach Children in a Language They Understand. 15 July  2016 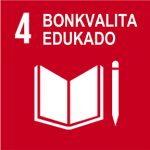 Discrimination on Grounds of Language: The Importance of Individual Language Rights.  15 July 2016
“Our Association believes that linguistic diversity and linguistic understanding can co-exist.”

Relations between the UN and NGOs

UEA is in special consulting relations with the United Nations. It is represented in many UN meetings and maintains contacts with national UN organisations.

1. The Economic and Social Council (ECOSOC) of the UN collaborates with many NGOs, classed into three levels of collaborator status. According to its web site, “The basis for consulting relations between the United Nations and non-governmental organizations was presented in the mid-1990’s after detailed intergovernmental review, which resulted in ECOSOC-resolution 1996/31. This relationship is the main way in which ECOSOC receives contributions from NGOs in its debates and public meetings and in its subsidiary structures, as well as in international conferences of the UN and its preparatory structures… [The NGOs] have certain privileges to submit topics to the agenda of ECOSOC and its subsidiary structures; they are permitted to attend meetings, where they can present written and give oral presentations to the governments.”

2. The Department of Public Information (DPI), whose office is located in New York City, recognises NGOs that agree to help disseminate information about the UN throughout the world. Currently, 1,300 NGOs are formally connected to DPI, among which is the UEA. DPI organises regular information meetings for NGOs, and also an annual conference (in 2016 it occurred in Korea; UEA was represented by a two person delegation). Its information centre is open to NGOs, and it facilitates the formation of partnerships between the UN and NGOs on issues of shared interest.
The NGOs in collaboration with ECOSOC have their own organisation, CoNGO (Conference of Non-Governmental Organisations), of which the UEA is also a member. The UEA is also a member of the CoNGO Committee on Education, Learning, and Literacy, which works mainly out of New York City, and the Committee on Peace, which works mainly in Vienna. The NGOs linked to the DPI also have their own committee, with which UEA actively collaborates.
UEA has an official link to UNESCO in the category of operational relations. UEA is represented in UNESCO meetings and often is able to advise or collaborate on issues of shared interest.

Learn more about the UN

To learn more, first visit the web site of the UN, which exists in the six official languages of the UN (Arabic, Chinese, English, French, Russian, and Spanish).

For other languages you can look for web sites of national UN associations (you can find a list at wfuna.org), as well as regional sites which exist in many languages. For example, unric.org lists sites in 13 western European languages.

More about the history of language at the UN.

We use cookies in order to give you the best possible experience on our website. By continuing to use this site, you agree to our use of cookies.
Accept